In 1943 nineteen trains left Westerbork for Sobibor. Over 34.000 men, women en children from The Netherlands made this unwilling journey to this unknown destination in Eastern-Poland. With a few exceptions, these people were all killed within a five-month time span. Only 18 people out of all these Dutch transports to Sobibor survived the war. 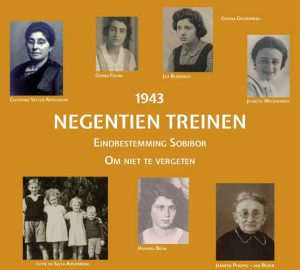 On the 2nd of March 1943, a train left the Westerbork Camp with 1105 people to the back then unknown extermination camp Sobibor. After a 3 day journey, this train arrived on March 5. This was the first transport from Holland to Sobibor. No one survived. The Sobibor Foundation made from nine of the victims a portrait. It is our goal to extract their names from oblivion.

We also made a page on www.joodsmonument.nl. We will make portraits of people who were killed in Sobibor. See our page on Joods Monument. 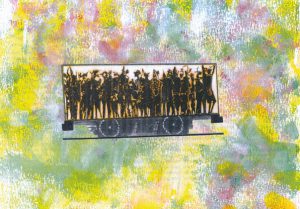 Almost no-one survived the deportations to Sobibor. Out of 34.313 deportees, only 18 returned after the war. The transport of the 10th of March 1943, leaving with 1105 Jews from Westerbork, is a special transport for two reasons. In the first place, this was the last transport for which an ordinary passenger train was used. The following 17 transports consisted of cattle-trains.  Here more information about the various deportation trains.

The second reason why this was a special transport was the number of survivors. 13 people survived the war, all women. One of the was Mirjam Blits. She wrote the book  Auschwitz 13917. Hoe ik de Duitse concentratiekampen overleefde.

On Wednesday, March 17 the 3rd train left Westerbork for Sobibor. There were 964 persons on this train. Only one of them survived the war; Alex Cohen from Groningen. You can read his story on sobiborinterviews.nl. 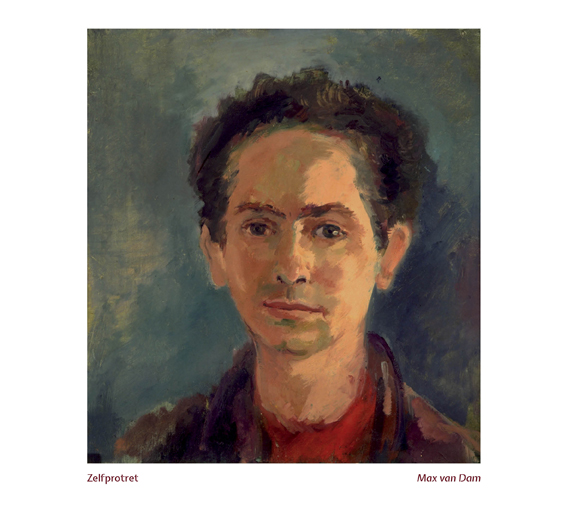 Around the same time, the Dutch artist Max van Dam was deported from France to Sobibor. His story can be read here. 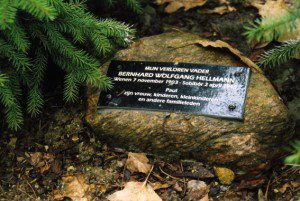 The 5th transport from Westerbork to Sobibor left on Tuesday, March 30. There were 1255 men, women and children aboard and no one survived the war. The train arrived in Sobibor on April 2nd, 1943.

One of the victims was Bernhard Hellmann (39). He was in hiding in Ede, where he thought he was safe and was betrayed nonetheless. His son Paul, in hiding on another address, survived the war.

During the trial of camp-guard John (Iwan) Demjanjuk, Paul Hellmann was one of the co-prosecutors. He spoke on behalf of his father. You can read the portrait of Bernhard Hellmann here. 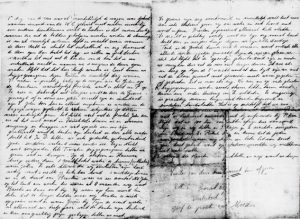 The letter of Levie Sluijzer

2020 persons left for Sobibor on Tuesday, April 6, 1943. Only 2 women would survive the camp and the war,  Selma Wijnberg, and Ursula Stern. Both women were chosen by the SS upon arrival to work in the camp. During the uprising of October 14, 1943, they escaped and could survive the hell of Sobibor. In 2010 Selma was interviewed by the project ‘Late gevolgen van Sobibor’. The full interview can be read here.

Not only the testimonies of Selma Wijnberg and Ursula Stern are witnesses of this transport. A letter from Levie Sluijzer also remained. He did not survive Sobibor, but wrote about the long travel by train from Westerbork to Sobibor and hid his letter in the cattle car where it was retrieved when the train returned to Westerbork for transport #7. 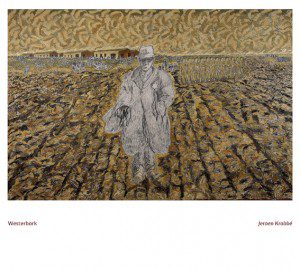 The 7th transport that left for Sobibor was on Tuesday, April 13, 1943. On this train, there were 1204 men, women and children. No one returned. Like the other 18 trains, Westerbork was the place of origin. More information on this transit camp can be found on the website of Herinneringscentrum Kamp Westerbork.

In the spring of 2010, Jeroen Krabbé made nine monumental paintings that picture moments from the life story of his grandfather, Abraham Reiss. Abraham Reiss was a successful diamond merchant in the 1910s. During the 1929 crisis, he lost his fortune. During the German occupation, Reiss and his family members were deported to Westerbork and from Westerbork to extermination camp Sobibor. He was killed upon arrival in July 1943. 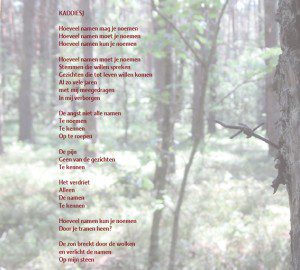 On Tuesday, April 20, 1943, 1166 people leave Westerbork for Sobibor in cattle cars. Upon the arrival on Friday, April 23, they were all gassed. Two of the victims are Salomon (29) and Bertha (30). Their baby Ellen, 4 months old, was able to survive through hiding.

In 2007 Ellen joined the ‘Herdenkingsreis’ of the Sobibor Foundation. She visited the place where her parents were murdered. Shortly after this visit, she wrote ‘Kaddiesj’. 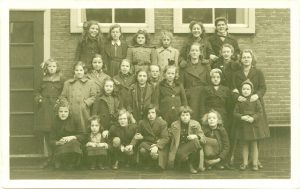 There were no survivors in the deportation of April 27, 1943. 1204 men, women and children were murdered.

During the trial of camp guard John (Iwan) Demjanjuk, which took place in Munich from 2009 till 2011, several Dutchmen were co-prosecutors. One of them was Rob Wurms. He acted for his murdered half-sisters Kaatje and Selma (Veronica). Rob survived the war in hiding. Rob Wurms died on the 24th of March 2011, 68 years old. He died before the verdict of the trial. He already prepared his statement which was brought into the trial a few weeks after his death, on April 14, 2011, at the court in Munich.

An interview with Rob Wurms can be found on the website Late Gevolgen van Sobibor. 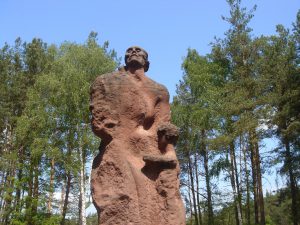 The 4th of May is the day of commemoration of the Dutch victims of the 2nd World War.

The poem Klein monument was read by Anneke Hemrika for all of those who never returned, and even no family was left. No grave, no monument. This was the fate of 1187 men, women and children who left Westerbork on May 4, 1943, by train to Sobibor. They were all murdered 3 days later. They have no grave. Sobibor is a mass grave, a visible memory of the deepest point human behavior can reach. Sobibor is a warning of the atrocities humans are capable of.

At this moment former extermination camp Sobibor is turned into a commemoration site, with a museum. 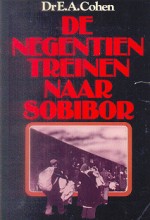 The first book in The Netherlands on Sobibor (1979)

The 11th transport from Westerbork to Sobibor left om May 11, 1943. In this train, there were 1446 men, women and children. One person would survive that war,  Jozef Wins. When he arrived Sobibor he was, with other men, selected for forced-labour in a nearby camp. Two years later the exhausted Win was liberated in Dachau.

Although many Dutchmen were killed at Sobibor, this camp remained unknown for a long time. 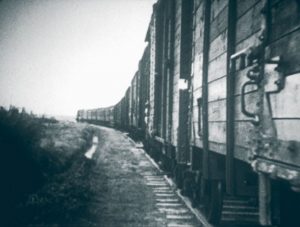 Al these people came from somewhere, had a house, a place to live, were raising their children and celebrated their birthdays. The Jewish occupants of those houses disappeared. Lots of them were murdered, but the houses remain.

Houses with a history.
For instance on the Nieuwe Keizersgracht in Amsterdam. The present occupants of these houses decided to commemorate the former occupants with a special project. Here more information about this initiative. 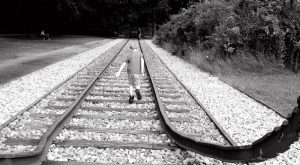 The 13th train from Westerbork to Sobibor left on Tuesday, May 25, 1943. The list of this transport contains 2862 names. Upon arrival in the extermination camp, 3 days later, all of these men, women, and children were murdered. All of them. Or perhaps not?
You can read here the unique story of the 12-years old Isidor (Jack) Koopman; the boy that did not go to Sobibor. 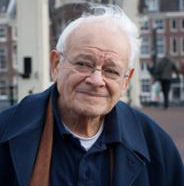 In the 14th transport from Westerbork to Sobibor, there were 3006 men, women and children. Most of them were gassed on the day the train arrived in Sobibor. A group of 80 men was selected for forced labor in a different camp. Jules Schelvis was the last one that was allowed to join this group. He would never see his wife Rachel Borzykowski again.

After the war, it became clear Schelvis was the only survivor of this transport. When Schelvis retired he wrote his experiences during the war (Binnen de poorten) en wrote Vernietigingskamp Sobibor. In 1999 he founded the Sobibor Foundation. 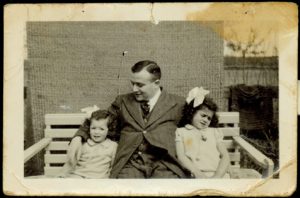 On June 8, 1943, the 15th train left from Westerbork to Sobibor. On this train, there were 3017 persons. It was the train of the notorious Children’s Transport.

This disaster started a few days earlier in camp Vught. Suddenly it was ordered that all Jewish children had to leave this camp. The SS found these children too troublesome. Almost 1300 children, many of them accompanied by there mothers, sometimes their fathers, were brought to Westerbork on the 6th and 7th of June.

Since 2007 the Sobibor Foundation organizes an annual commemoration trip to the former extermination camp Sobibor. In the program, there is always cooperation with students and teachers from neighboring towns (Wlodawa, Lublin, Chelm). 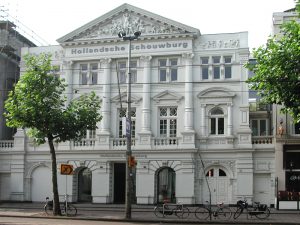 After a break of 3 weeks, a train left Westerbork on June 29th for Sobibor. This was the 16th train. Aboard there were 2397 persons. No one survived Sobibor.
For many people, Camp Westerbork was not the first camp of detention. In Amsterdam, many Jews were held for hours, days and weeks in the Hollandsche Schouwburg before they came to Camp Westerbork or Camp Vught. 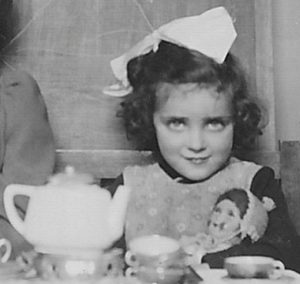 The 17th train that left for Sobibor left on Tuesday, July 6 from Westerbork. Aboard there were 2417 men, women and children. They were all murdered upon arrival in Sobibor on Friday, July 9.

One of the was Lea Judith de la Penha, a girl of 6 years old from Amsterdam. After the finding of here, name tag in 2012 here name was no longer in oblivion. More about this finding here.

On Tuesday, July 13, 1943, train 18 leaves Westerbork for Sobibor. No survivors from the 1988 passengers.
In 2009 a trial started in Munich against the former camp guard John (Iwan) Demjanjuk. He was found guilty in 2011 and condemned to 5 years imprisonment. This was probably the last Sobibor trial.

You can find an overview of all the Sobibor trials here. 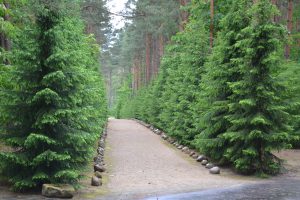 The last train that left Westerbork for Sobibor left Westerbork on Tuesday, July 20, 1943. This was transport 19. In the cattle cars, there were 2209 men, women and children. No survivors.

On the 14th of October 1943, there was a revolt in Sobibor. Hundreds of inmates escaped on that day. Sobibor was closed immediately and demolished. Nothing was to be seen of the place where over 170.000 Jews from various European countries were murdered.

Over 34.000 men, women and children were forced from The Netherlands to Sobibor. With a few exceptions, all of them were killed within a 5-month timespan. Only 15 women and 3 men returned after the war.