At the entrance of the Vondelpark, at the Van Eeghenstraat, has been placed an artwork. On the exact spot where during World War 2 a sign was placed with the text “forbidden for Jews to enter the park”, now is placed a mirror and a textboard. 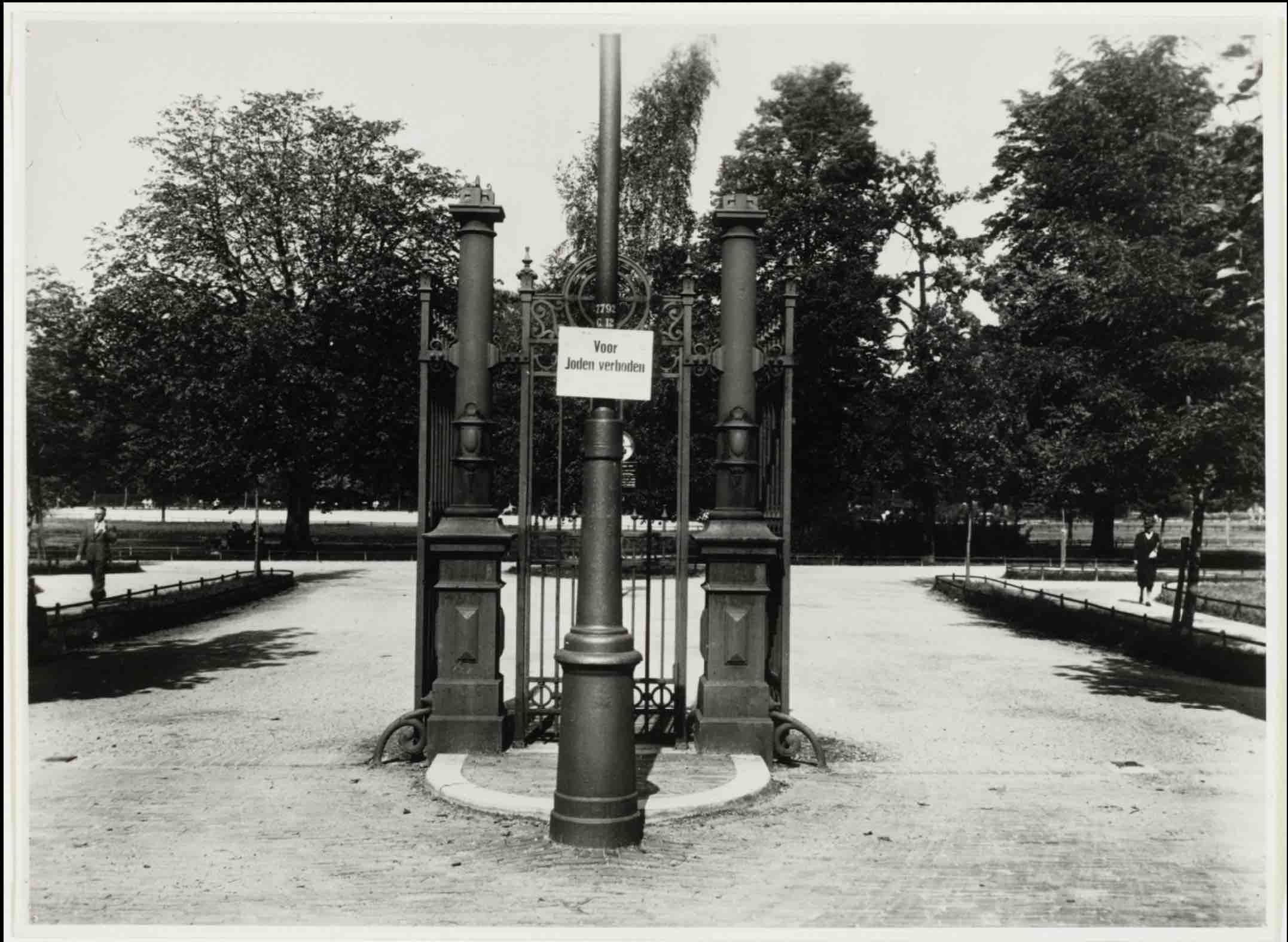 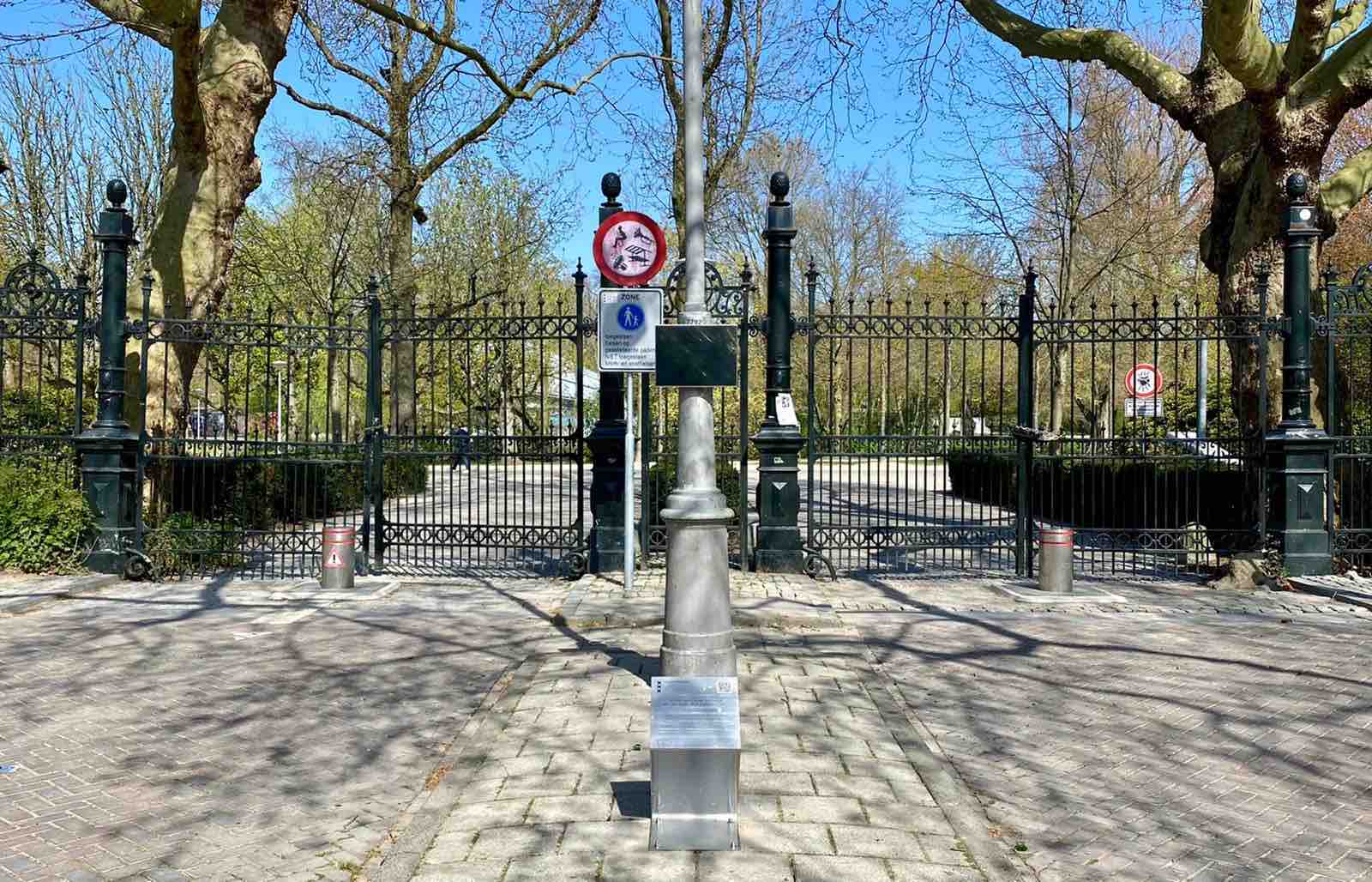 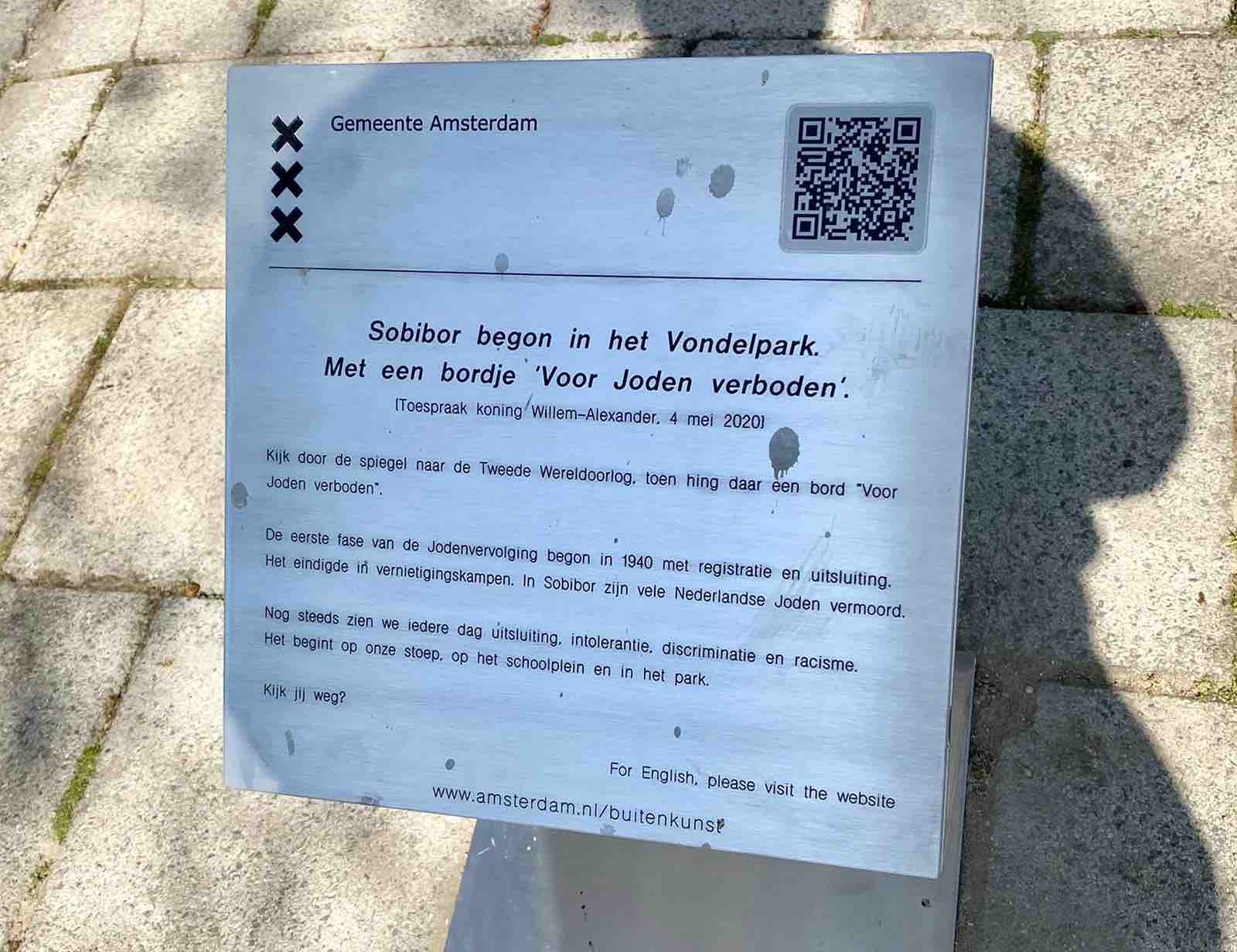 The artwork is an initiative of Niels van Deuren, in collaboration with the Amsterdam 4 and 5 May comité and the municipality of Amsterdam. Van Deuren was inspired by the speech of king Willem-Alexander during the Memorial Day of 4 May 2020, in which he said: “Sobibor started in the Vondelpark. With a sign: Forbidden for Jews to enter the park”.

A year later there has been realized a memorial, that consist of a mirror and a textboard. The mirror invites the viewer to think what he or she would do when seeing injustice. Like in 1940, when the anti-Jewish measures started. “And what would you do now, when you see somewhere racism, discrimination or intolerance? Can you look yourself right in the eyes?”.

The work is one of the first works that highlights “looking away”, what happened during the Second World War. King Willem-Alexander cited during his speech Jules Schelvis, a man who survived Sobibor, who described how the Jews in Amsterdam were arrested during the Second World War, and that the rest of Amsterdam was just looking and looking away: “Hundreds of people looked without any protest to the trams full of [Jewish]people, that passed by under strict supervision”.

Today, still people are looking away, if they say somewhere racism, intolerance, injustice or discrimination. Even if people are very close and could say something about it.

The artwork at the entrance of the Vondelpark, wants to hold a mirror in front of the faces of the people.

The title of the bord, “Sobibor – What would you do”, refers to a poem of the killed resistance fighter Gerrit van der Veen “wat would you do”. His poem was published in the resistance newspaper De Vrije Kunstenaar in March 1944.

Prosecution of the Jews

In the Second World War anti-Jewish measures were introduced rapidly one after each other. In 1940 the access to most public services was blocked for the Jewish people. In May 1942 it was mandatory to wear the Star of David on the clothes, and in July 1942 the deportations started to the extermination camps. In camps like Sobibor and Auschwitz more than 100.000 Jewish Dutch people were killed.

The Amsterdam-Zuid municipality will send flowers to the memorial sign on 4 May.

On the same day, at 17:15h, a memorial will start. Speakers will be Rika, Christine Gispen-de Wied, Micha Bruinvels, Alejandra Slutzky, Kjell van Dijk and Niels van Deuren. Each of them will tell their own story on the theme of “looking away” and racism. On the next page the persons are described more in detail.

More information can be found on the website: www.4en5meiamsterdam.nl/bord-vondelpark en www.amsterdam.nl/buitenkunst