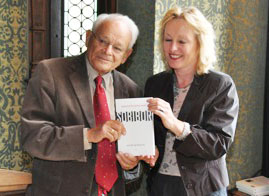 “A fearless and tireless fighter who keeps the memories alive.” This is how Jet Bussemaker, former Secretary of State of VWS, portrayed Jules Schelvis when she, on April 28, 2010, received the first copy of the book of Jules Schelvis ‘Ooggetuigen van Sobibor (Eyewitnesses of Sobibor). Jules Schelvis is so important for keeping the memories about Sobibor alive, Bussemaker said. She pointed out that in many cases the interviews if Schelvis’s latest book were made twenty years ago.

Besides the fact that the book was written by Jules Schelvis Jet Bussemaker mentioned the importance to remember Sobibor and all the horrors that took place there as a reason to accept this book. There was little attention to Sobibor for a long time, she said, for a clear and gruesome reason: the camp was so ‘successful’ that there were almost no survivors.
Bussemaker told about her visit to Sobibor in 2009. “I will never forget it.  I cannot imagine a more desolate place.” She told bout the Stones of Remembrance from the communist era when everybody was seen as a victim and not the Jews in particular. The so-called Himmelfahrtstrasse (Ascension Street) with the Memorial Stones for the Dutch victims were impressive to her.
“I feel the personal urge, most certainly after my visit, to make Sobibor a worthy place of remembrance. Bussemaker referred to the meetings about the future of this place which are held at the moment. Unfortunately, I am not the Secretary of State anymore and my Polish counterpart, with whom I made a perfect agreement last year, died recently at the terrible plane crash near Smolensk. But I am certain that others will continue his efforts, with the support of the Sobibor Foundation.”
“Sobibor is more in the public attention lately, by the Demjanjuk trial, by Selma Engel coming to The Netherlands and now the stories of those who survived the Sobibor uprising, collected by Jules Schelvis. This all contributes to remember Sobibor and its victims. In this way we will make a Place of Remembrance for future generations, realising that atrocities that took place there may never repeat themselves”, Bussemaker concluded.