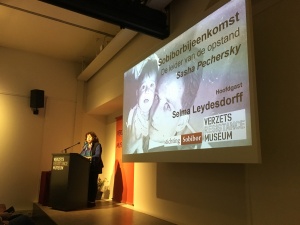 October 14, 2003. The rain pours down incessantly all day. Yet, more than 100 people with umbrellas gather in Sobibor to be present at the opening of the Lane of Remembrance by Thomas Blatt, one of the survivors of the revolt of 1943. Half of the guests are members of the Polish-Israeli Community in Lublin and the other half consists of interested people that travelled to Sobibor with Bildungswerk Stanislaw Hantz, amongst whom Jules Schelvis and myself.

Since the opening of the Lane of Remembrance, the Sobibor Foundation organises commemoration travels as well as field trips to Sobibor. At least twice a year we come to the Synagogue of Włodawa, where we always start our tour. No matter how difficult the financial situation of the Museum was: you, Marek, always provided us a warm welcome with coffee, tea and lots of cookies and you always tried to be there to greet us with your arms wide open. These are wonderful memories. 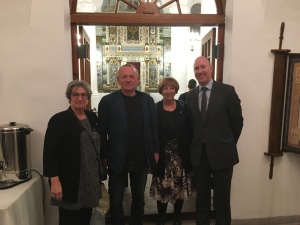 Saturday, April 10th, 2010. We have all just heard the news about the tragic crash of the Polish government plane near Smolensk at which all passengers were killed. You are in Amsterdam to present your educational project; a box with several dvd’s dealing with the impact of the Shoah, and partly based on the Dutch documentary by Mirjam Huffener on the transport of the nearly 1300 children that came from Vught via Westerbork to Sobibor. Clearly upset and moved, however, you do succeed in presenting this educational project, which is the first contemporary teaching tool based on the possibilities that IT brings.

In the same year, when Selma Leydesdorff starts her intense search for the book she wants to write about the life of Alexander Pechersky, it is you who provide her with all the information she asks for, including the – for her so important – addresses of the survivors of the revolt of 1943.

In 2015 the book Sobibor Extermination Camp 1942-1943 is published in Holland with support of the Province of Gelderland and the Sobibor Foundation. It is the dissertation with which you graduated. To us is seems like a book that would take at least a lifetime to write, but you, with your unbridled energy and involvement in the subject, succeeded in about a decade. And once you start reading this book, it is difficult to stop, which also is a great achievement.
We know that you and Jules Schelvis, who was an expert on the subject as well, did not have identical opinions on the number of victims of Sobibor, but there is no doubt that with this work of study you contributed largely to the richness of resources on Sobibor.

Around the turn of the century you started to think about a way to commemorate all those Jews that were murdered in Sobibor, but of whom not a single trace was left or visible. You got the German organisation Bildungswerk Stanislaw Hantz and the Dutch Province of Gelderland involved and sometime later also the Sobibor Foundation. In the course of time the idea of the Lane of Remembrance reached its final shape: at the presumed place of the Himmelfahrtstrasse, the road that led from the field where people had to undress to the gas chambers, a lane would be situated and on both sides of this lane trees would be planted. Before each tree a stone could be placed with a textplate commemorating individuals, families or communities.
At the opening there were some 20 stones, but this number grew year by year. At this moment there are approx. 300 stones. They are dedicated to individuals in loving memory by their family members. They are for parents, for children, for grandparents, for uncles and aunties, for friends. There are stones for communities and there are stones for the unknown, as there are many families that were completely erased and for whom there is no family left to mourn them. Most stones are from Holland, due to the fact that in Holland we have painfully punctual documentation of the victims ánd in Holland there is a Sobibor Foundation to take care of the arrangements. But there are also stones from Poland, Germany, France, the US and more. We are sure more names can be found, also in other countries.

During our annual visits we got to know the names of the people that were commemorated at the Lane of Remembrance and they became dear to us. We always lingered at the stone for Selly Andriesse, the 10-year-old girl from Holland that was remembered by her former not-Jewish school boyfriend. We always bowed our head for Rabbi Mendele Morgenstern from Włodawa, who chose not to be parted from his children and stayed with them till the very end. We were present when the stone for Leon Feldhandler, who played a leading role at the revolt of 1943, was placed by Lublin students. After they had explored the life of their fellow citizen this was their sign of honour to him.
Everybody that travelled with us to Sobibor was always moved when walking the Lane of Remembrance. Sobibor no longer was an anonymous place of oblivion. Real people of all ages had arrived there to be killed, just because of their race and now we could see that.

It did not take long before it was clear that the Lane of Remembrance opened the door to educational programmes. One day in April, on Holocaust Memorial Day, Iwona Kryczka and her colleagues Eliza and Joanna with their students from Lublin were waiting for us at the Synagoge of Włodawa and asked if they could join us to Sobibor. We accepted and improvised our program that afternoon, as we had not prepared anything for students. But it worked out fine and we parted as friends. Shortly after a school from Włodawa joined in and this educational circle expanded further when a couple of years ago the school from Chełm got engaged and now, 10 years later, most of these working relations still stand.
The students from Lublin surprised us every year with the result of the investigations they performed during the year. Every year they handed us their accomplishment on paper, works of great accuracy and beauty.
The drawings of the students from Włodawa were breathtaking impressive.

Another important result of these meetings is that the people travelling with us always opened up for the questions that the students asked them. They experienced that these youngsters were willing to deal with a difficult and even controversial subject like the Shoah, and they returned home with hope for a better future.
So, it is justified to say that the Lane of Remembrance succeeds in involving young people, who are so important for our future, and it succeeds in bringing hope to others.

Dear Marek, you are the one who made this all possible. You had the courage to choose your own way in making Sobibor a respectful place in contemporary commemoration and education. For this you cannot be thanked enough.

It is therefore and for your incessant effort for the good cause that Sobibor is, that the  Sobibor Foundation is honored to present you the Rachel Borzykowski award, which consists of a medal and an amount of € 500,- to be spent anyway you like it. 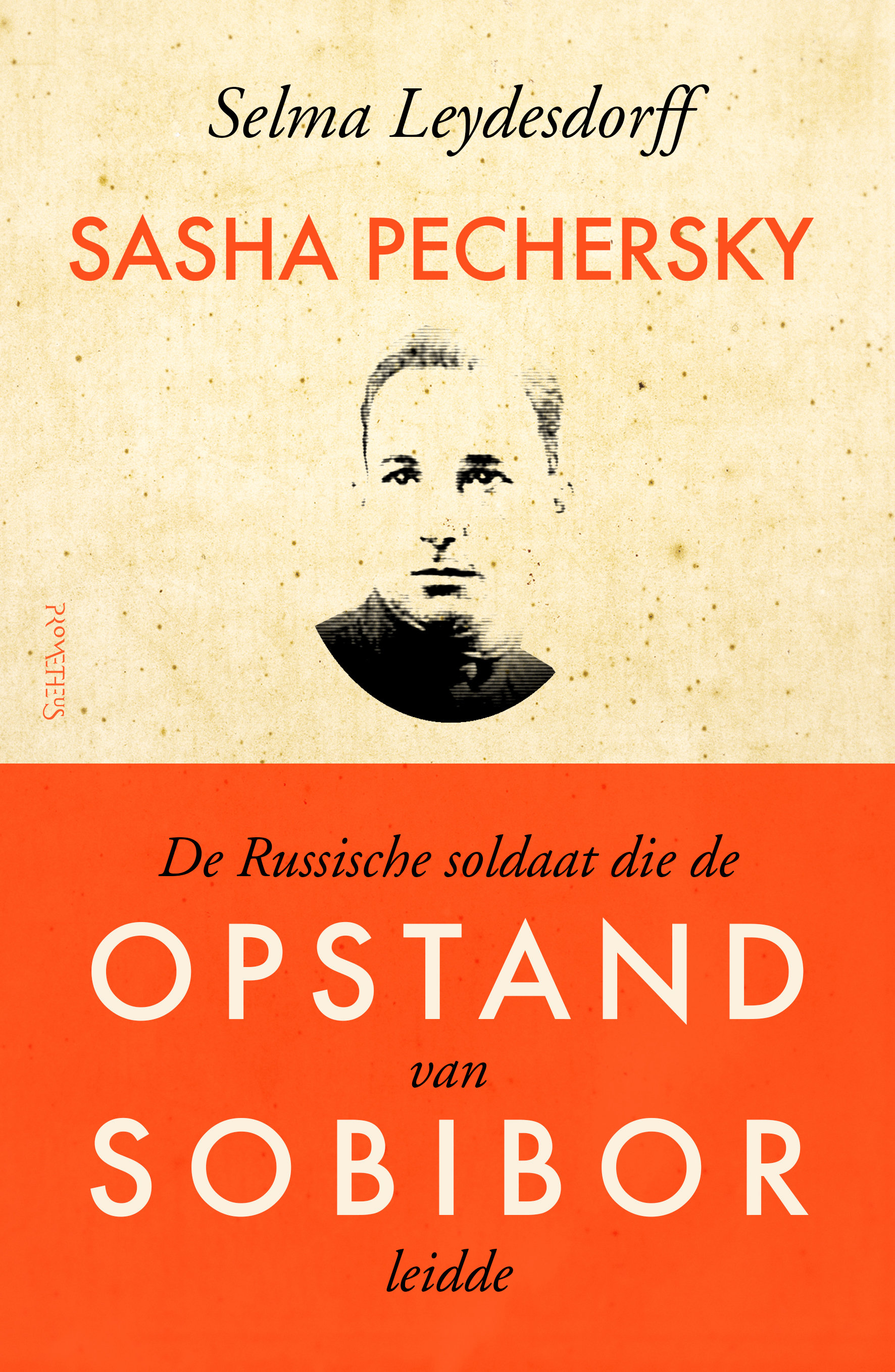 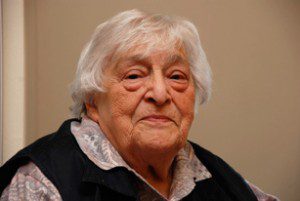 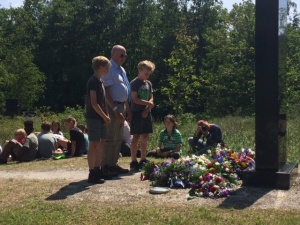 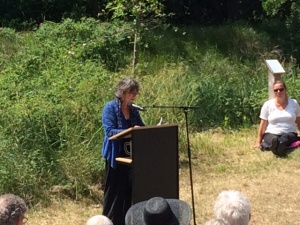 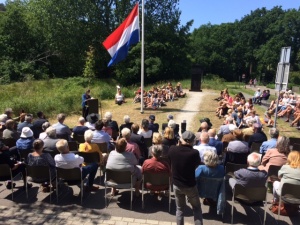 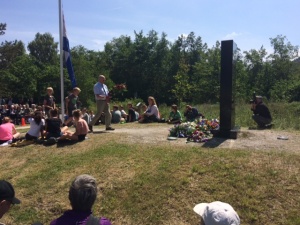 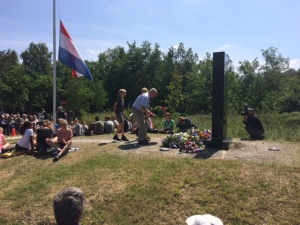